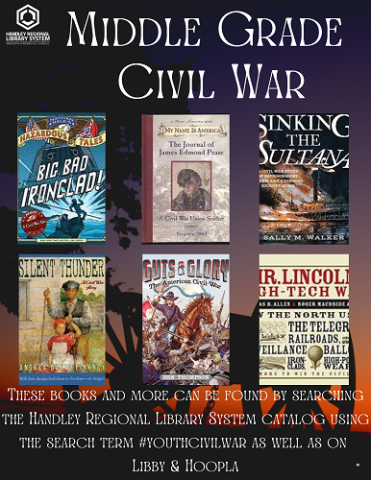 Our middle grade book spotlight this week is all about the Civil War!!  This time period in our history was one of our most horrific and devastating in numerous ways and impacted not only Americans at that time but we are still experiencing some of the ramifications today.  We have an amazing collection of fiction and nonfiction titles that explore this time period from a variety of viewpoints and perspectives so I encourage you to read and explore this event even more because you never know what you may learn this time.  These books and more can be found by searching the catalog using the search tag #youthcivilwar as well as on Libby and Hoopla.

Big Bad Ironclad! by Nathan Hale--Graphic novel portraying the the race between the North and South during the Civil War to develop the first ironclad warship.

Silent Thunder by Andrea Davis Pinkney--In 1862 eleven-year-old Summer and her thirteen-year-old brother Rosco take turns describing how life on the quiet Virginia plantation where they are slaves is affected by the Civil War.

The Journal of James Edmond Pease by Jim Murphy--James Edmond, a sixteen-year-old orphan, keeps a journal of his experiences and those of "G" Company which he joined as a volunteer in the Union Army during the Civil War.

Guts and Glory: The American Civil War by Ben Thompson--Presents an overview of the American Civil War that brings the war to life through stories of heroic figures and daring deeds. Features black-and-white photographs and illustrations, and dozens of primary source quotes..

Sinking the Sultana by Sally Walker--Explores the history of a disaster on the Mississippi River on April 27, 1865 when the "Sultana," a steamboat in Vicksburg, Mississippi, exploded and killed over 1,500 passengers. The "Sultana" had been packed with too many passengers and necessary repairs had not been done in order for the greedy captain to make as much money as he could from the newly released Union soldiers. Examines what went wrong and what could have been done in order to avoid the tragedy.

Mr. Lincoln’s High Tech War by Roger MacBride Allen--Expertise in military history and technology provides readers with an in-depth look at President Lincoln's role in the Civil War, and how his use and appreciation of technology aided in the North's victory. From the telegraph and rapid fire, repeating rifles to ironclad ships and railroads, readers will see the products of the Industrial Revolution and their influence on the Civil War in a whole new, technological way.