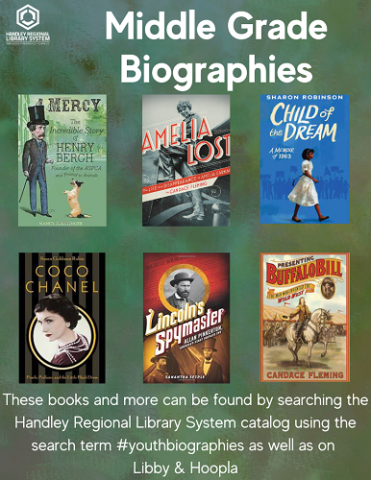 Our middle grade book spotlight this week is all about books which are biographies and memoirs!  Biographies and memoirs are books about individuals, each with their own unique stories to share and read.  Biographies are usually written about an individual by a different person and memoirs are written by the featured person.  Just like nonfiction, these books are so not boring (even though they get a bad rap as being that way) and we can learn so much not only about the individual but as well as the history and culture of the time as well as about ourselves. These books and more can be found by searching the catalog using the search tag #youthbiographies as well as on Libby and Hoopla.  Check back next week for a new middle grade book spotlight and if you have any book suggestions, please let us know!!

Amelia Lost by Candace Fleming--Chronicles the dramatic search for pilot Amelia Earhart after she mysteriously disappeared during her attempt to circumnavigate the globe at its widest point. Includes black-and-white photos and traces her flight route.

Child of the Dream by Sharon Robinson--Sharon Robinson, daughter of baseball legend Jackie Robinson, reflects on her unique coming of age during the Civil Rights Movement of the 1960s. While on the front lines of the struggle as her father's daughter, and helping host get-togethers and fundraisers for notable civil rights dignitaries such as Martin Luther King Jr., she also struggled with all the challenges of puberty as well as being one of the only black children in her wealthy neighborhood, and the pressures that accompany such as role.

Mercy by Nancy Furstinger--Highlights the life, career, contributions, and legacy of Henry Bergh, the founder of the ASPCA. Includes a timeline and photographs.

Lincoln’s Spymaster by Samantha Seiple--Allan Pinkerton was working as a barrel maker in Illinois when he took on his first case as a private eye. Before long, he had opened the first ever private detective agency and had his own assembly of undercover agents. Soon the team was fighting outlaws and uncovering plots to assassinate President Lincoln. Pinkerton's work laid the groundwork for America's future Secret Service.

Presenting Buffalo Bill by Candace Fleming--Offers a young adult biography of Buffalo Bill Cody that follows him from childhood to adulthood, and debunks popular myths about him and his achievements. Includes black-and-white photographs and archival illustrations.