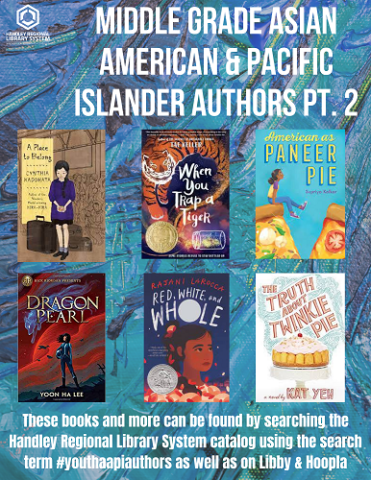 Our middle grade book spotlight this week is all about books which have been written by Asian American and Pacific Islander authors!!!  May is Asian American Pacific Islander Heritage month and we are showcasing some amazing and talented individuals.  Each author brings their own unique viewpoint and background to each of these titles, providing a point of view which is a must read.  There is an incredible mix of realistic, historical, and some science fiction providing options for many tastes and preferences.  These books and more can be found by searching the catalog using the search tag #youthaapiauthors as well as on Libby and Hoopla.  Check back next week for a new middle grade book spotlight and if you have any book suggestions, please let us know!!

A Place to Belong by Cynthia Kadohata--A Japanese American family is devastated by their treatment in the internment camps set up during WWII and are coerced to renounce their American citizenship and go back to Japan. Twelve-year-old Hanako feels the loss deeply as America is the only home she’s known. She just happens to be of Japanese heritage. When they arrive in Japan they seek out her grandparents who live just outside of Hiroshima, which is completely destroyed, starving, and dominated by the black market. As the Japanese struggle to survive, Hanako feels unbelievable pressure, but then her father teaches her about the tradition of kintsukuroi, which involves fixing broken things with a strengthening golden lacquer. Hanako, wanting to find her place in the world, wants to find her own gold to strengthen her family and new country.

Dragon Pearl by Yoon Ha Le--Thirteen-year-old Min stows away on a space battle cruiser as an impersonated cadet in the Thousand World Space Force in order to discover what happened to her older brother. As a girl with fox-magic, she could use a charm or her shape-shifting ability, but to keep her family's secret safe, Min's mother insists on her children appearing human at all times.

When You Trap a Tiger by Tae Keller--Korean Americans Lily, her sister Sam, and her mother move in with their Korean grandmother, Halmoni, who is very ill. Lily is approached by a magical tiger who tells her that long ago Halmoni stole something from the tigers and that they want it back—and in exchange, they will help heal Halmoni.

Red, White, and Whole by Rajani LaRocca--A first-generation Indian American, Reha views her school and home lives as vastly different worlds. At home she's required to follow a strict code of conduct and participate in her family's traditions and rituals. At school, her American friends relish 1980s pop culture and view her as a fish out of water. Reha is especially estranged from her mother who only seems to see her mistakes. Then, when Reha learns her mother has leukemia, she not only worries, but also believes she'll need to be the perfect daughter in order to save her.

American as Paneer Pie by Supriya Kelkar--When a racist incident rocks her small Michigan town, eleven-year-old Lekha must decide whether to speak up or stay silent, even as she struggles to navigate her life at home, where she can be herself, and at school, where she is teased about her culture.

The Truth about Twinkie Pie by Kat Yeh--Twelve-year-old GiGi and her junior-high-dropout sister DiDi have just won a million dollars in prize money, meaning they can move from their trailer park in South Carolina up to the North Shore of Long Island, where along with a better life they also uncover secrets about their family's past.