(His)torytime from the Archives: Admiral Byrd 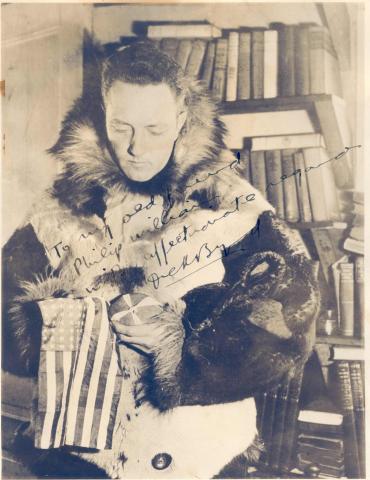 (His)torytime from the Archives: Admiral Byrd

Many of us are stuck at home right but we can still let our imaginations soar with stories from the past. Winchester native Admiral Richard E. Byrd (1888-1957) had an unquenchable thirst for adventure his entire life. At the age of twelve, he made an unsupervised journey around the entire world.  When the United States entered into World War I, Byrd received flight training and by 1918 had earned his wings.

Though Admiral Byrd accomplished many things during his career, he is probably best known for his Polar expeditions.  In 1926, Byrd, along with pilot Floyd Bennet, made what is likely the first flight over the North Pole, a feat which made Byrd into a national hero.  He then proceeded to make multiple expeditions to the Antarctic, being the first to fly over the South Pole in November 1929.  He stayed alone in the Antarctic from March 23 until August 10, 1934.  Apparently, even this was not enough, because he flew over the South Pole again in 1947 and 1955.

One day (hopefully soon), we will be able to make our own journeys of adventure again, and while they may not be quite as extraordinary as those of Admiral Byrd, we look forward to that time. Where will your adventures take you?