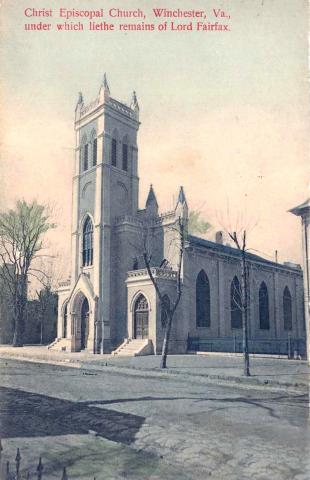 John Bruce (1793-1855) was a man who spent over twenty years of his life finding ways to make an impact on his community. He was born in Scotland, but emigrated to the United States and settled in Winchester. Some people make impacts through teaching and preaching, some through caring for people’s well-being, but others find that they are best suited to improving the community through other means, as John Bruce did by overseeing various constructions.

Bruce must have had an eye for beauty as well as good construction, because he was the architect for the original Christ Episcopal Church. Many consider their churches to be focal points in their communities, and Bruce built a building that must have stood as a monument to both God and the congregation.

With that project completed in 1828, Bruce turned to another construction project: a railroad. In 1835, the world was becoming faster and increasingly connected. At this point in time, John Bruce became the president of the Winchester and Potomac Railroad Company, in which position he oversaw the laying of a good portion of the tracks.

His next accomplishment also improved the community’s connectivity with the rest of the world. In 1849, he became a partner in a group of local citizens who were granted a charter to run telegraph lines from Winchester to Harper’s Ferry.

John Bruce’s story should remind us to become aware of our own talents and to the needs of our community, and that we can use our individual talents to make a difference in our own unique ways.