The Doom of the Saloon: New Exhibit Focuses on Prohibition 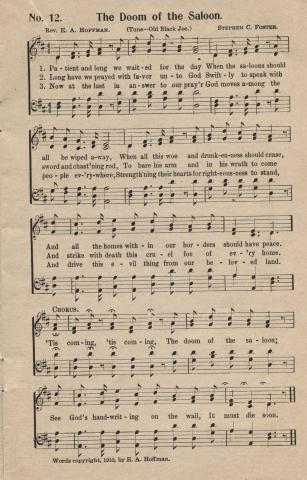 The Doom of the Saloon: New Exhibit Focuses on Prohibition

“Patient and long we waited for the day/ When the saloons should all be wiped away,” begins The Doom of the Saloon, one of several song scores to be found in the book Best Temperance Songs, published in 1913.   This book and many other prohibition related items are featured in the latest exhibit by the Stewart Bell Jr. Archives.

Federal prohibition began in 1920 following the ratification of the Eighteenth Amendment to United States Constitution which banned the production, importation, and sale of alcohol. In Virginia, however, a statewide ban on alcohol began in 1916 following a popular referendum in 1914.

The passage of these laws was the result of a number of grass roots movements committed to improving public morals, fighting poverty, strengthening families, and protecting women and children. Organizations such as the Sons of Temperance, the Anti-Saloon League, and the Women’s Christian Temperance Movement (WTCU) all believed that alcohol was a destructive force in American society and pushed for total abstinence from drinking.

The Women’s Christian Temperance Union was founded in 1874 and Winchester’s chapter began in October 1884 at a revival meeting at Market Street United Methodist Church. It membership was all female, as the organization’s name suggests, but men could become honorary members provided they signed a pledge of abstinence.

Temperance organizations were highly effective at mobilizing popular support through rallies, meetings, and literature enumerating the evils of alcohol.  Nonetheless, almost as soon as prohibition took effect, a counter movement began to overturn the law. Farmers and businesses had suffered considerable financial losses because of prohibition, and governments lost tax revenue. Prohibition also created an illegal market for alcohol that gave rise to the speakeasies, bootleggers, and gangsters that populate histories of the 1920s. Prohibition lasted thirteen years, ending on December 5, 1833 with passage of the Twenty-first Amendment to repeal the Eighteenth.

The exhibit is located in the lower level of the Handley Regional Library just outside the doors to the Archives and runs alongside Teetotalers and Moonshiners, a travelling exhibit from the Library of Virginia hosted by the Bowman Library.  The exhibits run through January 18, 2020.