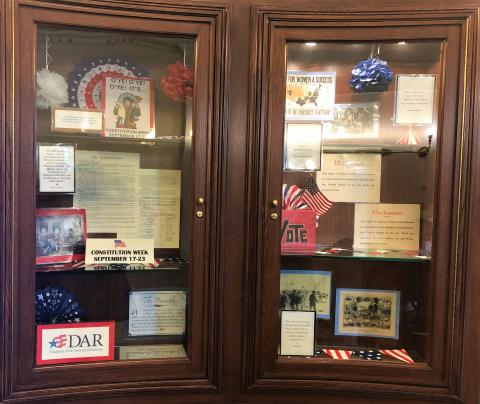 Constitution Week (September 17-23) is an annual celebration of Americans’ liberties, freedoms, and rights as outlined by the Constitution of the United States.

The Constitutional Convention in Philadelphia signed the Constitution on September 17, 1787.  This document established our government and laws in such a way as to build a philosophy of human rights and dignity into the structure of the government itself.

The Daughters of the American Revolution partnered with Handley Regional Library to create a display on Constitution Week and the right to vote.  The display is at the Handley Library just inside the main entrance.  Be sure to stop by and take a look while it is still up!

John Randolph Tucker (a politician and a native to Winchester) wrote several volumes on the Constitution.  In the introduction to the first volume of The Constitution of the United States: A Critical Discussion of its Genesis, Development, and Interpretation, Tucker asks himself what “equality” means in the Constitution, because even outside of changeable social circumstances, people have intrinsic differences such as differences of intelligence, health, and talent.  He summarizes the solution in the (cryptically worded) sentence, “Every man for himself in absolute self-use against all intrusive control by any other man.” To put it more simply, the equality that the Constitution promises is one where every individual has the same right to pursue his duties, and no one can rightfully intrude on anyone else’s life.  In this way, the less intelligent, less healthy, and less talented are seen as people who can and should act in their own self-interested, and are given all the resources necessary to have a good standard of living.

In 1956 at the request of the Daughters of the American Revolution, Congress and President Eisenhower established Constitution Week.  The annual celebration aims to accomplish these things:

Here at the Stewart Bell Jr. Archives, we can help with the third goal in particular.  We offer resources covering the Revolutionary War and the U.S. Constitution, and are always excited to share them with you!

Tucker, John Randolph.  The Constitution of the United States: A Critical Discussion of its Genesis, Development, and Interpretation.  Chicago: Callaghan & Co., 1899.
342.73 T791

Published by Kylie Feiring on
September 16, 2020