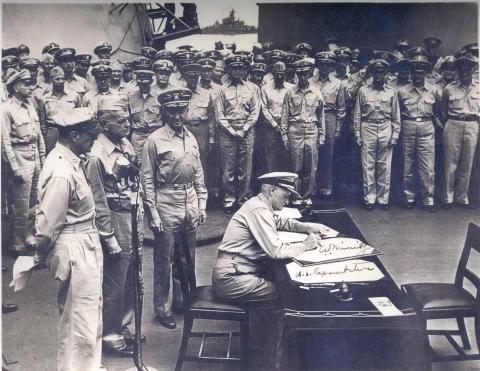 September 2 marked the 75th anniversary of the end of World War II.  On that day in 1945, known as V-J Day (Victory over Japan Day), the Japanese boarded the USS Missouri and signed formal surrender documents, finally bringing peace to a world that had seen far too much suffering.  The American General MacArthur, serving as Master of Ceremonies, spoke these powerful words before the signing:

Nor is it for us here to meet, representing as we do a majority of the peoples of the earth, in a spirit of distrust, malice, or hatred.  But rather it is for us, both victors and vanquished, to rise to that higher dignity which alone befits the sacred purposes we are about to serve, committing all of our peoples unreservedly to faithful compliance with the undertakings they are here formally to assume…

Imagine the strength of character necessary to rise from such a place of suffering and even terror, and to put these feelings aside in the name of rising to the nobility in which one can see even beyond ideological differences, to see the humanity and goodness that all people have in common.

It is not just the great generals of the war who were called on to show this generosity of spirit, but our own parents, grandparents, and great-grandparents who also had to rise above their own distrust in order to live in a world at peace.  In the introduction to Finding Your Father’s War, Jonathan Gawne notes that the reason for tracing someone’s service in World War II is not to find bare facts, but to understand how the war impacted someone’s life.

If you are researching your WWII soldier—especially now that we are celebrating 75 years since the end of the war—come visit the Stewart Bell Jr. Archives.  We have resources to help you get started, and our World War II collection is full of military records, focusing on soldiers from the Winchester-Frederick County area.

Published by Kylie Feiring on
September 05, 2020