107 Years of the Handley Library 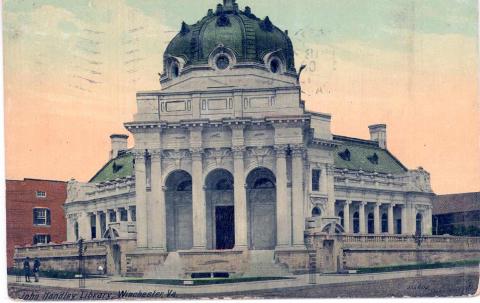 107 Years of the Handley Library

The Handley Library first opened its doors in a formal ceremony 107 years ago on August 21, 1913.  The invitation sent out for the event states that “the exercises will be held in the lecture hall of the Library at eight o’clock p.m. and immediately thereafter the reading rooms and books will be open to inspection.”

Winchester had been eagerly awaiting this day for a number of years.  Judge John Handley died in Scranton, PA in February 1895, leaving $250,000 to the City of Winchester to be invested until it reached $500,000, at which time it would be used to build a library.  The Handley Board of Trustees purchased a lot in 1902, and began building in 1907.  The building was finished in 1910, but there were no furnishings, no staff, and no books.

Finally, in January 1913, Charles Vernon Eddy began his role as the Handley Library’s first librarian, after receiving training at the Free Library of Philadelphia.  Vernon Eddy had a vision for the library.  Though closed-stack libraries were common, he elected to adopt an open-stack model, where members of the public may browse through the books themselves (as it is today).  He also intended to emphasize the library as a place of learning over one of recreation, and took pride in the relatively high percentage of non-fiction checkouts.

As a testimony to the eagerness with which the people of Winchester waited for the library to open, on August 22, 1913 (the first day open to the public after the formal ceremony), citizens were lining the street waiting to enter.  People elbowed past each other to be the first to get a library card, and more than 120 people signed up by noon that day.

In those early years in the 1910s until the beginning of World War I, the library was one of the biggest things on the minds of local people.  Though no longer such a novelty, the library is still here for you.  Its reach has extended to Frederick and Clarke counties and beyond, it has increased its services to include programming to support the community, the archives are a well-developed entity within the library, and the collections now include technologies that the original staff and patrons could only have dreamed of.  Don’t hesitate to get excited all over again and come visit us!